How to Keep Your Dog-GONE Sense of Humor 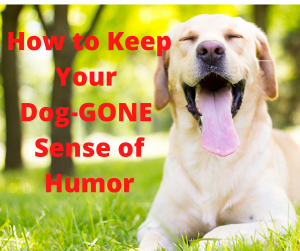 Motivational humorist, Roger Rabbit once said, “A laugh can be a very powerful thing. Sometimes in life it’s the only weapon we have.”

I knew that our yellow lab, Bo, had an interest in another dog … his first girlfriend. And we all remember the feeling associated with our first love: he had a spring in his step, a twinkle in his eye, and a smile on his face. After every romantic encounter, Bo would lounge in the yard. It reminded me of a love scene from an old romantic movie from the 1940’s … a lit cigarette … a Martini … violins playing softly. Life for the Bo dog was good.

Bo would disappear and always return; this time, however, he was gone for two days. Through the magic of sharing our posts on Facebook,  we learned that Bo had been visiting his girlfriend, was picked up by doggie law enforcement, and had been taken to canine incarceration.

My experience of retrieving our retriever from the animal shelter was embarrassing. The perky woman at the rescue facility was excited, expressing sentiments that our dog would be over-joyed to see me. Regretfully, Bo is much more familiar with Thomas than he is with me. So when little Miss Perky and I arrived at Bo’s “Marriott Suite” (the animal shelter is immaculate and spacious), Pen # 20, Bo looked at me with absolutely no response. He behaved as if he had never seen me before. And why would he want to be rescued? His pooch palace was amazing.

In efforts to defuse the moment, I said, “This place is wonderful and so clean! I know ya’ll watch these animals carefully and I am sure you noticed that he prefers to do his business on concrete. I guess it’s good that dogs don’t need toilet paper.”

My lame attempt at levity did not amuse the attendant. Her face went South along with her perky attitude. To make matters worse, Bo just sat there and stared at me—he was not amused either.

“Are you sure this is your dog, Mrs. Herlong?” she inquired with a stern look.

“Oh, yes!’” I said trying to look convincing. To be honest, I began wondering myself.

Then she questioned me. “So how old is the dog? When was his last rabies shot? Have you had him wormed?”

I could not answer any of her questions. I felt like a crummy dog owner and wished Thomas was there for this reunion-gone-wrong.

With hesitation, she handled me the long, red leash attached to a defiant dog. As I was being dragged through the animal shelter, Bo stopped and greeted every person he saw with a tail-wag and lick. I glanced behind to see an army of animal shelter people watching my every move. I never thought I would be judged at the animal shelter. Why is it during times like these I wish I could somehow hand-out my resume.

Praying for the strength of Samson and the demeanor of Esther, I managed to open the car door. As soon as I did, Bo pulled away, red leash trailing behind, and ran back to the shelter porch with the entire animal shelter community watching. But then, something happened that was nothing short of a miracle: right there is front of the Marriott Suite for dogs our intuitive yellow lab squatted on that concrete porch and did what dogs do. Then, he ran back to me and jumped into his car. He let those folks know in no uncertain terms that he was, indeed, my dog.

As we drove away, Bo was a happy pup. The window was down, his ears were back, and his pink tongue was hanging out of his mouth as he drooled all over my window. I imagined he was reminiscing about his lady friend.

I was feeling stressed and out of control but this incident taught me to transform my stress into gratitude.

Bo gave me a good laugh and a new story. I guess you could say, he rescued me.

Share with those who love dogs or need a good chuckle; and for now, this is a message for most of us.